You are here: Home / Blog / Business / You Have To Study The Game, To Win The Game 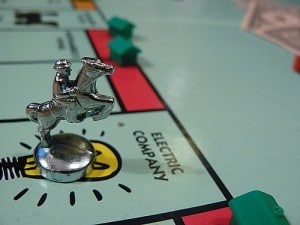 Recently, a friend shared a post with me from Business Insider, entitled How To Use Math To Crush Your Friends At Monopoly Like You’ve Never Done Before.  This BI presentation deck by Walter Hickey, which analyzes the mechanisms behind the popular board game Monopoly,  was especially interesting for me, as I had done a similar, though much more rudimentary, analysis of the game many years ago as my 6th grade Science Fair project.  Once a geek, always a geek, right?

I encourage you to take 5 minutes to review this deck so that the rest of this post will make sense  in context.  I think you will find it a pretty interesting and quick dissection of the game, and it does a nice job of summarizing in an easy to digest fashion the work of other Monopoly analysyts such as DurangoBill and Tim Darling.   Both of these gentleman studied this game mathematically and scientifically, using statistics, Markov Chains and Stochastic Process State Diagrams.   I was a pretty smart kid, but I was only 12.  So I did it old school, via forcing my classmates to play Monopoly with me non-stop every day in Science period for about 4 months, and manually tallying our landing spots in a spiral bound notebook.    But regardless of our different analytical approaches, I was pleased to learn that the primary conclusions reached by the full-on analysis were consistent with my sixth grader’s analysis from almost 40 years ago:

While I nailed several of the game’s key WHAT truisms ,  I fundamentally missed some/most of the basic mechanisms around WHY these rules worked.  In hindsight, the roles of Jail, Chance and Community Chest seem pretty obvious, as does the fact that 2 dice are most likely to role a 7 (or a 6 or an 8), but I missed the contributions of those factors altogether.

But now as an older, more educated and and slightly wiser businessman, I can offer the following learnings from the analysis of this business simulation game:

I realize that it may seem a bit simplistic to compare business to a board game,but  keep in mind that they are both just games, it’s just that one just uses real money.