You are here: Home / Blog / Leadership / Root For Your Cinderella Teams 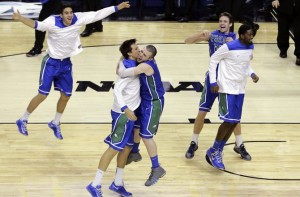 This post is highly time critical, as the sports metaphor around which this whole topic is based is likely to have wound down by the time you  read this post.  The NCAA Basketball Tournament is my favorite sporting event by far, and last night we saw a virtually unknown #15 seeded team take out a longstanding basketball powerhouse program that was seeded #2 in their bracket.  As momentum began to shift in the game, people around the country (including myself) started to really get behind the Florida Gulf Coast University Eagles as they romped over NCAA legacy stalwarts Georgetown.  These guys came from nowhere, the FGCU program is so young and so new that they weren’t even eligible for the tournament until last year.
How does something like this even happen?  How do conventional wisdom and any logical statistical basis get utterly ignored by a team like the Eagles? I think there are a number of factors which help these Cinderella Teams beat the odds:

So how does all of this relate to business?  Today, many companies, even very successful ones, are facing a dearth of talent at the top.  It’s a real succession crisis.  There are no Cinderella teams, everyone who is in leadership worked their way up through long and predictable career progressions.  As a result, the demographics at each level of the management pyramid are relatively consistent in terms of age, gender and nationality.  A lack of diversity encourages group-think and impedes innovation.  People who came from the same place and walked down the same road for the same length of time tend to think similarly.

I would posit that it’s highly beneficial for your company culture to have a few Cinderellas bubbling up through your hierarchy.  These are the women and men who ultimately hit your executive suite in their late thirties or early forties as opposed to their fifties or sixties.   Their performance and responsibility exceeds their experience, by a wide margin.  Not every young person has the right makeup for such a career acceleration, but certain players can really rise to the occasion if they are given the chance.  How do you make this happen?

Even though the Florida Gulf Coast University Eagles are unlikely to make it to the Championship Game, they will develop more over the next week or so than they probably have at any point in their basketball careers to date.  You have a similar opportunity to give some selected 15 and 16 seeds in your entry level ranks the same kind of accelerated development ride.  Find your in-house Cinderella Teams and Root for them!!